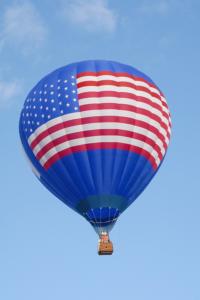 What a Line Up!

CPNM looks forward to these 3 Potential Nominees who have submitted their CPNM Presidential Nomination Requests (with their FEC ID #) to be Nominated and then Voted upon at the 2020 CPNM State Tele-Convention.

MUST Be Registered, with ONE (1) Verified Phone number with Executive Committee & CPNM Chairman by MONDAY MAY 11, 2020 6PM MDT. 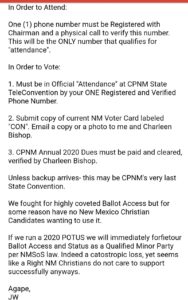 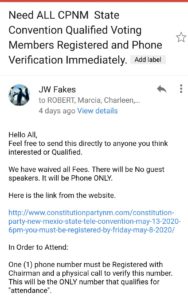 Although CPNM is  Qualified Minor Party and does not participate in Primary Elections, CPNM so far has only heard of ONE (1) place to PHYSICALLY VOTE in this Primary in Albuquerque. So far, it is downtown, City Hall.  In an aggressive effort by BOTH Major Parties (The Uni-Party) to set precedent & FORCE MAIL-IN Voting- most Parking is far away, also has a Fee, and subject to hours of operation, elevators, and other obstacles. 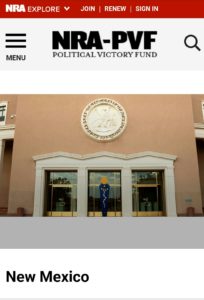 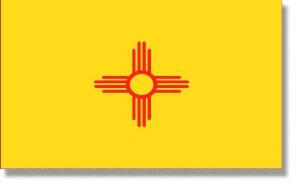 PerCOVID19 Mandates this is an emergency protocol directed per bylaws through the Executive Committee.

We have waived all fees for this years Tele-Convention.

To participate you must be Registered with The Executive Committee, with ONE (1)verified Phone by Chairman Elect at jf.nmEcon.us(atsymbol)gmail(dot)com. ***NO LATER THAN FRIDAY MAY 8, 2020!

You will recieve an email with a call in code. This will be phone ONLY.

*** No other numbers will be qualified “attendance”.

Per Bylaws: To vote or be Nominated for Office:

1. You must currently be a CPNM Registered Voter with NMSoS. You must have a copy your current Voter Registration Card filed with the Executive Commitee. SoSNM (against our protest), labels CPNM Voters Card “CON”.

3. You MUST be Registered AND in ATTENDACE at the CPNM State Tele-Convention from your ONE(1) Registered  AND VERFIED Phone Number MAY 13, 2020.

RE: Presidential Ballot for 2020 and New National Officers

I wanted to notify those State Chairmen who were unable to attend the National Convention and Spring National Committee Meeting of the election results.

Congratulations to our Presidential Team!

The party wishes to express our appreciation and gratitude to all the nominees who participated in the nomination process.  The sacrifices of your time and finances in bringing the message of liberty and constitutionally-limited government through your campaigns were not in vain. Many Americans were introduced to the hallmarks of our party  —the principles of liberty and the hope of restoring our Constitutional Republic —through your efforts!

Other News from the Convention
2020 Platform
The use of an electronic meeting limited the ability of the platform committee to consider proposed changes to our platform. Therefore,  it was the recommendation of the committee to retain the 2016 Platform and adopt it as the 2020 platform. The Convention delegates approved the proposal.

The following national committee members were elected to serve as your new officers:

Congratulation to our new officers!

A word of appreciation to all our retiring officers – Words cannot begin to express our gratitude for your labor on behalf of liberty and the party. We look forward to your continued efforts to build the party as you move on to serve in new ways.

The newly elected officers will be working with the retiring officers and will take the reins at our Fall National Committee Meeting in Phoenix, Arizona. Time and place to be announced.

The Constitution Party Responses to Covid-19

Attached, you will find an official response from the National Party to the Covid- 19 situation. Please feel free to use and distribute the statement. 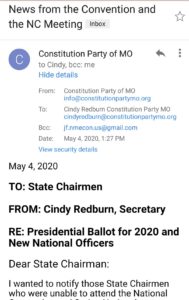